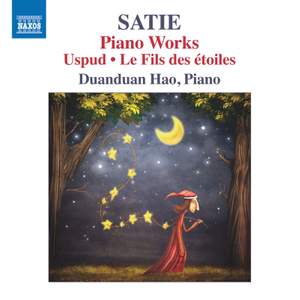 Satie's personal eccentricities have never masked the fact that his music was both revolutionary and anticipatory of later artistic movements, principally Minimalism, Surrealism and the Theatre of the Absurd. His piano music offers a perfect distillation of these elements. The Allegro is his earliest known work, offering his first use of quotations, a favoured device. The extended pieces Le Fils des étoiles and uspud derive from incidental music, glorying in parodic and grotesque scenes, while his 'humoristic' phase of the 1910s is explored in Cinq Grimaces. Only Satie could attempt to fuse a fugue with a waltz, as he does in the Fugue-valse.