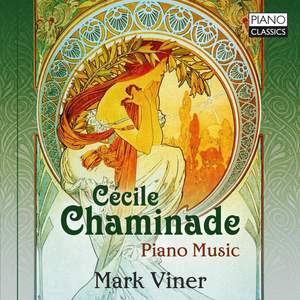 A charming listen. Chaminade is an unsung hero of her time, and this disc showcases just how colourful her music is. Mark Viner plays with panache, his renditions light and sensitive. — BBC Music Magazine, February 2019, 4 out of 5 stars More…

Welcoming Mark Viner’s Piano Classics album of opera fantasies by Sigismond Thalberg (PCL0092), Gramophone wrote: ‘A quite exceptional disc from a blazing young British talent.’ Viner has now made his own selection from the hundreds of piano pieces, some light, others more serious, composed by Cécile Chaminade (1857-1944). Periodically revived in tokenistic ways, Chaminade’s output is now being seen in the round, and it reveals a voice of not only feminine delicacy and charm, but also a melodist of refinement whose gift for a well-turned tune never left her in a career spanning over six decades.

The Pierrette, air de ballet, op.41, may be an attractive trifle, but the Six Etudes de concert present a stiffer challenge for the pianist: the first of them, ‘Automne’, was one of her best-loved pieces at a time when her music was ubiquitous in the smart salons of Europe. The brief Les Sylvains gives the impression of having been conceived at a single sitting, so engaging is its suggestive portrait of wood-nymphs.

Once described as ‘nearly a genius who knew what and how to write for pianists of moderate ability,’ Chaminade produced countless miniatures of gentle pleasures such as La Lisonjera, op.50, the Arabesque, op.61, and the Songs without Words, op.76. However, the four-movement Poème provençal, op.127, is far more substantial: ‘among Chaminade’s most inspired final productions’ according to Viner in his invaluable booklet essay. His survey concludes with the scintillating Thème varié, op.89, which, like several other works on this album has previously received very few recordings.

Mark Viner is chairman of the British Liszt and Alkan Society and has a busy concert schedule.

A charming listen. Chaminade is an unsung hero of her time, and this disc showcases just how colourful her music is. Mark Viner plays with panache, his renditions light and sensitive.

This new survey must count among the finest yet, showing the range and ambition of Chaminade in short works, played with an innate charm and understanding of the genre…Viner’s earlier single-composer recordings of Thalberg, Liszt and Alkan have earned him high praise…Someday, in the not too distant future, someone will sit up and take note of what an exceptional talent we have in our midst.

Viner’s energy and commitment to his cause are superbly invigorating. Pier rette, his curtain-raiser, could hardly be given with a greater sense of the composer’s feisty attraction, and in the 6 Études de concert Op 35, where Chaminade is every inch the virtuoso, he makes light of the opening number’s double note cascades and the final Tarentelle’s whirling gyrations. Excellently recorded, and with Viner’s enthusiastic notes as an added bonus, Volume 2 is eagerly awaited.

I loved this young British pianist’s exploration of the weird and wonderful world of Charles-Valentin Alkan last year, and he’s an equally persuasive and imaginative advocate for the music of Cécile Chaminade (1857-1944) here, fully alive to the charm and wit of miniatures like Pierrette and the Arabesque, without applying generic prettiness across the board – the echoes of Liszt in the Études de Concert resonate loud and clear.

Viner makes a wisely varied selection for this rare recital...All tell of a composer who has more substance than her reputation has sometimes suggested. Viner’s playing, impressively fleet-fingered and ripe-toned, does immaculate service.

[Viner] takes these romantic trifles seriously - they profit from it as well.