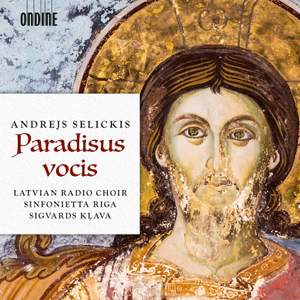 Andrejs Selickis (b.1960) was a pupil of Pärt. His music occupies the same kind of religious territory as that of his great mentor, with lots of references to Byzantine sacred chant, Orthodox... — Choir & Organ, March 2019, 5 out of 5 stars More…

Selickis: My Soul is Yearning for Heaven (version for mixed choir)

Selickis: We Sing to Thee

Andrejs Selickis (b. 1960) is a singular, idiosyncratic phenomenon among Latvian composers. As with Arvo Pärt, Selickis’ work is inseparably linked to his faith, which has found a deep and unique expression in his distinct style. Iconic symbolism, sacred archetypes and the ecstatic experience of God’s presence are the keys to his music. This new recording by the Latvian Radio Choir includes choral works by Selickis. Andrejs Selickis grew up and studied music in Latvia, when a crucial meeting with Arvo Pärt took place in the 1970s. Arvo Pärt became a mentor and an example for the composer, both in life and in music. After Pärt emigrated from the Soviet Union, Selickis’ found new home in his church. Selickis has worked as an independent artist since graduating from the conservatory. He lives in Riga and serves as a regent, liturgist and psalmist in various congregations of the Church. In 2015 he was awarded the Latvian Great Music Award, the highest state honor in music. The creative collaboration and friendship between Sigvards Klava and Selickis began in 2012 with the Litany to Mother Teresa, the first composition with which Andrejs Selickis entered active concert life. Together, Klava and Selickis have studied and sung Old Believer chants and have also set out pilgrimages to various monasteries. The present album serves as a resume of the creative collaboration between the Latvian Radio Choir, Sigvards Klava and Andrejs Selickis.

Andrejs Selickis (b.1960) was a pupil of Pärt. His music occupies the same kind of religious territory as that of his great mentor, with lots of references to Byzantine sacred chant, Orthodox religious music and so on. The composer couldn’t wish for more sympathetic interpreters: throughout, the Latvian Radio Choir produce their renowned, seemingly effortless sound, honed by Kļava for the last quarter of a century, to great effect, while the disc as a whole offers the listener something of a meditative experience.

Monody is an essential characteristic of Selickis’s work…A fascinating introduction to the work of this talented composer, in superb performances recorded in St John’s Church in Riga.