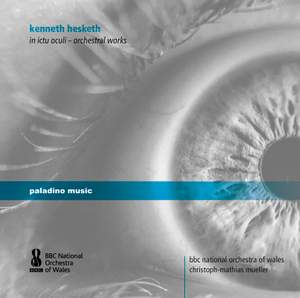 Hesketh is a composer at the height of his considerable powers. Born in Liverpool in 1968, his music is saturated with an Anglo-French modernism informed by figures from Dutilleux to Knussen,... — BBC Music Magazine, January 2019, 5 out of 5 stars More…

Hesketh: Of Time and Disillusionment

III. Notturni per i defunti

This new release features three works by composer Kenneth Hesketh. Knotted Tongues is based on a theory of René Descartes (1637) which expounds the idea that the body is no more than a wonderfully complex machine. Of Time and Disillusionment is written for a reduced quasi-classical orchestra (no percussion) and focuses on clarity of line without adumbration in orchestral texture. In Ictu Oculi, Three meditations is an extended meditation upon the transience of time and that all things come to an end. Kenneth Hesketh has been described as “one of the UK’s most vibrant voices, having a brand of modernism that reveals true love for sound itself” (International Piano) and as “a composer who both has something to say and the means to say it.” (Tempo Magazine) He has received numerous national and international commissions, including the Fromm Foundation, the Birmingham Contemporary Music Group, and the BBC Philharmonic.

Hesketh is a composer at the height of his considerable powers. Born in Liverpool in 1968, his music is saturated with an Anglo-French modernism informed by figures from Dutilleux to Knussen, and interests from classical architecture to medieval iconography. These three recent orchestral works showcase to brilliant effect his deepening fascination with scientific and other philosophies of existence.

Together, they give a very cogent view of Hesketh’s status as a composer, his current expressive concerns and the sheer vivacity of his orchestral writing.

Hesketh (b1968) is a composer of orchestral virtuosity. He controls dense tuttis with fine-tuned layering, economy within largesse. He’s at home with large concepts, too: entropy, transience and, in Knotted Tongues, “glottal catastrophe”.