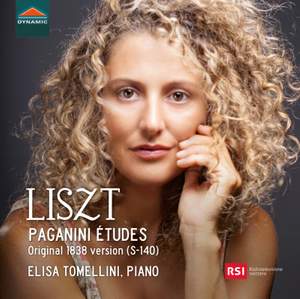 It is a rare delight these days to hear a pianist who dares to play pianissimo…There is charm here in abundance, together with staggering virtuosity…Finally, not the least of Tomellini’s abilities... — BBC Music Magazine, February 2019, 5 out of 5 stars More…

No. 3 in A-Flat Minor "La campanella"

Young and talented Elisa Tomellini loves challenges and is used to climbing high mountain peaks. Both physical as well as musical. No wonder then that she is the first woman to perform the first version of the Etudes aprés Paganini (S.140) that Robert Schumann reviewed as “the most difficult work ever written for the piano, as is the original for the violin. Certainly only a few pianists will be able to tackle them, perhaps no more than four of five in the world.” Dynamic is proud to feature one of them. As pianists almost always play the simplified version re-written by Liszt himself in 1852, the album Paganini Études and other virtuoso piano works contains the first 1838 version that Liszt wrote inspired by the Caprices, successfully achieving on the piano an extreme virtuosity that was unprecedented in that instrument’s literature. Born in Genoa, Italy, Elisa Tomellini has been studying piano since the age of five. She was admitted to the prestigious Music Academy ‘Incontri Col Maestro’ in Imola at the age of sixteen. In 1997 she gained a diploma at the Conservatory G. Verdi in Milan. She has won several pries at international competitions such as the ‘Viotti Valsesia,’ the ‘Concorso di Cantu’ and the ‘Concorso Citta di Pavia.’

It is a rare delight these days to hear a pianist who dares to play pianissimo…There is charm here in abundance, together with staggering virtuosity…Finally, not the least of Tomellini’s abilities is her grasp of form. The near 10 minutes of ‘Il lamento’ can seem self-indulgent, but here everything unfolds naturally and meaningfully. And the piano sound is superb.