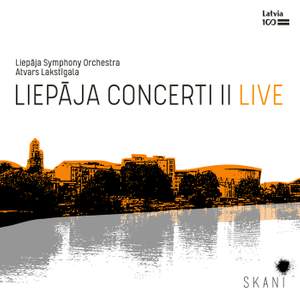 I. Dances for the Spring Rain and Wind

II. Dances for the Moonlight

III. Dances for the Dawn

In 1881 the first philharmonic orchestra in the Baltic countries was founded in Liepaja. Presently it is known under the name Liepaja Symphony Orchestra and has become a key promoter of Latvian composers' music and initiator of creativity not only in the Kurzeme region but throughout Latvia. Since 2010 the Liepaja Symphony Orchestra has been granted the status of a national orchestra, and its chief conductor since the 2017/2018 season is Gintaras Rinkevicius.

Atvars Lakstigala was the principal conductor of the Liepaja Symphony Orchestra from 2010 to 2017. Since 2009 he has been a regular guest conductor at the Latvian National Opera.