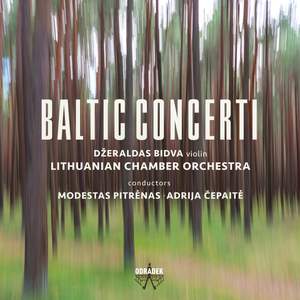 Starring virtuoso violinist Dzeraldas Bidva, three concerti by Vasks, Senderovas and Juzeliunas transport the listener to Lithuania in a release which coincides with the centenary of the country's independence.

Dzeraldas Bidva interprets three Baltic concerti: two for violin and orchestra, including Peteris Vasks' Vox amoris, and one featuring organ and violin, for which Bidva is joined by the young and talented organist Karolina Juodelyte. The Lithuanian Chamber Orchestra is conducted by Modestas Pitrenas and Adrija Cepaite.

The music of Juzeliunas is steeped in Lithuanian folklore; that of Vasks has a strong sense of nature translated into sound; and that of Senderovas not only reflects dramatic experiences in Lithuania's turbulent history, but also reveals the richly multicoloured and polyethnic soundscape of the country.

This album appears in the year marking the centenary of Lithuania's restored independence. It celebrates the continuing tradition of musical art in the Baltic countries within the broader context of centuries-old European traditions.