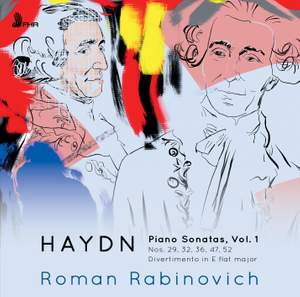 His sound is bright, muscular and clean, and he brings out all the wit and delicacy of Haydn’s invention; his articulation is immaculate no matter how fast he goes; and he responds imaginatively... — BBC Music Magazine, January 2019, 5 out of 5 stars More…

This new album is the first volume in a series of new recordings in which the illustrious pianist Roman Rabinovich will record the complete piano sonatas written by Haydn, for FHR.

Haydn was a prominent and prolific Austrian composer of the Classical period and composed 62 keyboard sonatas. Written over a 40-year period or so, and displaying a variety of styles, the earlier sonatas were written for harpsichord and the last for the newly developed hammer-action fortepiano.

Praised by The New York Times for his 'uncommon sensitivity and feeling', Roman Rabinovich has performed throughout Europe and the United States in venues such as London's Wigmore Hall, Leipzig's Gewandhaus, the Great Hall of the Moscow Conservatory, the Cité de la Musique in Paris, and the Millennium Stage of Kennedy Center in Washington DC. Lauded as 'a master of tone-colour' (International Piano, 2018), Rabinovich made his Israel Philharmonic début under the baton of Zubin Mehta at age ten. He was a top prizewinner at the 12th Arthur Rubinstein International Piano Master Competition in 2008, while in 2015, he was selected by Sir András Schiff as one of three pianists for the inaugural Building Bridges series, created to highlight young pianists of unusual promise.

Rabinovich has earned critical praise for his explorations of the piano music of Haydn, which include a 42 sonata cycle at the Bath International Festival, and partial cycles at the Lammermuir Festival and ChamberFest Cleveland. The New York Times has hailed Rabinovich's Haydn performances as 'admirable interpretations, performed with a rich, full-blooded sound, singing lines and witty dexterity'.

His sound is bright, muscular and clean, and he brings out all the wit and delicacy of Haydn’s invention; his articulation is immaculate no matter how fast he goes; and he responds imaginatively to those moments when Haydn’s experiments seem designed to puzzle his interpreters…The ‘complete’ Haydn may oust Rudolf Buchbinder’s magisterial set as the benchmark recording.

Rabinovich responds to this ever-inventive music with a broad palette of tone and touch, sweetly singing in the cantabile slow movements and with fluent dexterity in the fingery fast movements…The fly in the ointment is the competition…Nevertheless, the newcomer is a disc of individual charms and insights, and the development of the cycle as it unfolds will, without doubt, be well worth further listening.

The first two discs are a foretaste of splendours to come, with his singing cantabile in the adagio to the C major Sonata No 36 and beguiling virtuosity in Haydn’s brilliantly entertaining presto and prestissimo finales.

Sonata No 36 is exquisite; Rabinovich pitches the exploratory side of the central Adagio perfectly. Decorations are consistently in style throughout, yet it is in Rabinovich’s understanding of structure that he triumphs. He also understands that Haydn’s fragile textures (often only two parts) have an eloquence all of their own.