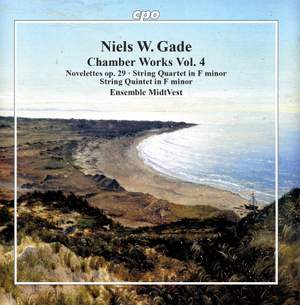 Novelettes in A Minor, Op. 29: I. Allegro scherzando

“Gade’s chamber music is marvellously written and does not deserve to disappear into the footnotes of musical historiography. The Ensemble MidVest is completely committed to Gade’s cause and performs these works recorded in perfect balance with an open naturalness showing his music in the most favourable light.” This is how FonoForum reviewed Vol. 2 of our Gade recordings based on the new historical-critical complete edition of his works. The compositional history of many of these works is long and complicated because he often submitted his earlier works to later revisions. One exception is his String Quartet of 1851, the first complete quartet of his authorship. It is not known why he later distanced himself from this composition inasmuch as it is distinguished by an expressivity stronger than that encountered in his later works. With his one-movement Quintet in F minor he created a work comparable in expression and form to the one-movement dramatic concert overtures with which he had occupied himself ever since his earliest youth.

Each issue of Ensemble MidtVest’s Gade series adds to the stylistic and taxonomical riddles surrounding the composer…[The Quintet] is beautifully played by Ensemble Midtvest’s strings.