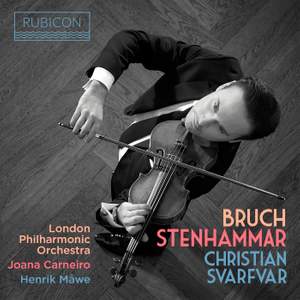 Svarfar and pianist Henrik Måwe deliver a performance that is notable for its impeccable unanimity of ensemble, and the duo project the more overtly emotional Two Sentimental Romances with noble... — BBC Music Magazine, February 2019, 3 out of 5 stars (Performance) / 4 out of 5 stars (Recording) More…

Christian Svarfvar has emerged as one of Scandinavia’s most sought after concert violinists. His debut album of the three Grieg Violin Sonatas was praised by the Financial Times ‘buoyed by Svarfvar’s fearless expression, rock-solid technique, stylistic acumen, Christian did us and Grieg a big favour and we must hear more from him’ Svarfar has worked with orchestras such as the Royal Stockholm Philharmonic, the London Philharmonic Orchestra, Simon Bolivar Orchestra, Borusan Istanbul Philharmonic Orchestra, Swedish Radio Symphony Orchestra. He has also collaborated in chamber projects with Martin Fröst, Maxim Rysanov, Tabea Zimmermann, Janine Jansen, Clemens Hagen, and with contemporary composers Steve Reich, Kaija Saariaho, Howard Shore and Anders Hillborg.

For his first album for Rubicon, Christian has recorded perhaps the most famous and best loved of all 19th century concertos, Max Bruch’s evergreen first Violin Concerto, and paired it with the Wilhelm Stenhammar’s warmly romantic Violin Sonata. The same composer’s two Sentimental Romances conclude the disc.

Svarfar and pianist Henrik Måwe deliver a performance that is notable for its impeccable unanimity of ensemble, and the duo project the more overtly emotional Two Sentimental Romances with noble restraint.

Svarfvar muses poetically over the opening solo of the Bruch Concerto…His tone gleams, and the way he tugs yearningly on the leading tones draws one in. The trouble is that he never quite shakes off the feeling of poetic languor.