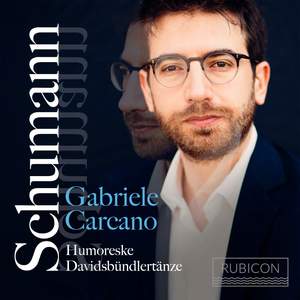 Carcano offers a strong vision of a thoughtful, deliberate Schumann: his rendition of the opening Humoreske is multi-layered, weighty; it’s perhaps not quite as eccentric as one might hope because... — BBC Music Magazine, January 2019, 3 out of 5 stars More…

I. Lebhaft in G Major

II. Innig in B Minor

IV. Ungeduldig in B Minor

XI. Einfach in B Minor-D Major

Italian pianist Gabriele Carcarno was the recipient of a Borletti Buitoni Trust Fellowship Award in 2010 and has been described as ‘a sculptor of sound’ and an ‘aesthete’ by the Süddeutsche Zeitung after his Munich debut in the famous Herkulesaal. Since then Carcano has appeared in many of the world’s major venues in recital and with major orchestras. He was invited by Mitsuko Uchida to the Marlboro Festival four times, and Uchida is one of the great pianists who has tutored Carcano – the others are Richard Goode and Alfred Brendel. Brendel and Carcano worked closely on the preparation of this all Schumann programme. Gabriele will also appear on a second Rubicon album this year in partnership with violinist Stephen Waarts in a programme of Bartok and Schumann. His debut album - an all Brahms recital for Oehms Classics, was highly praised by the BBC Music Magazine and Radio 3 Record Review, as well as Fonoforum and NDR in Germany, and winning a Supersonic award in Pizzicato magazine.

Carcano offers a strong vision of a thoughtful, deliberate Schumann: his rendition of the opening Humoreske is multi-layered, weighty; it’s perhaps not quite as eccentric as one might hope because of Carcano’s tendency to favour the sustaining pedal…Carcano’s performance left me deeply interested, if not wholly convinced.