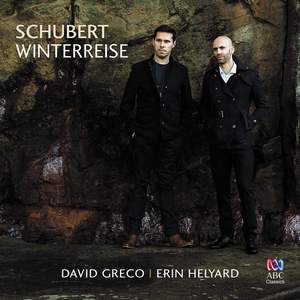 David Greco and Erin Helyard present the first Australian recording of Schubert's masterpiece on period instruments. Schubert's Winterreise is one of the greatest song cycles ever written. Completed shortly before his death at just 33, Schubert's masterpiece follows a young man spurned by his beloved who then wanders through a frozen landscape in ever-increasing states of existential angst, terror, and paranoia. Erin Helyard and David Greco present a Winterreise that's different from any you have heard before. This is how the work might have sounded to Schubert, a recording informed by scholarship around 19th-century performance techniques, and the different vocal traditions and pianos that existed then. But far from a dry, academic exercise, David and Erin strip away the stuffy, canonised aura of this famous work, presenting a Winterreise sung by a young man in the full fervour of love and an all-consuming passion. This is a performancethat captures every moment of Schubert's terror and mortality, a vital and utterly engrossing performance that takes you inside a work you've listened to many times before – but never truly heard.