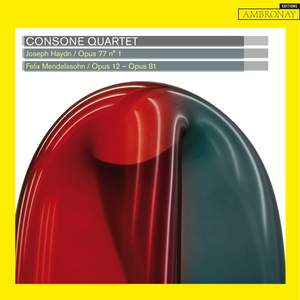 The young London-based Consone Quartet, a laureate of the ‘EEEmerging programme’, presents a CD of three major works of the string quartet repertory. In this release Joseph Haydn (op.77, no.1) and Felix Mendelssohn (op.12 and op.81) sound extraordinarily fresh and spontaneous. Formed at the Royal College of Music in London, the quartet is dedicated to exploring Classical and Early Romantic repertoire on period instruments. Winner of the 2016 Royal Over-Seas League Ensemble Prize, Consone was also awarded two prizes at the 2015 York Early Music International Young Artists Competition.

The group regularly collaborates with other musicians, such as the Fitzwilliam String Quartet, The Hanover Band, Mahan Esfahani and Gillian Keith.