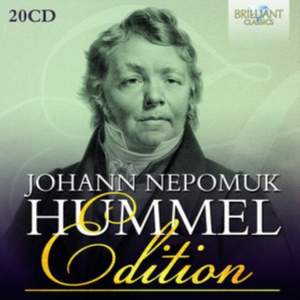 Hummel, J: Sonata in E flat for piano with Accompaniment of Viola, Op. 5 No. 3

Johann Nepomuk Hummel (1778–1837) was a pupil of Mozart, a protégé of Haydn, a friendly rival of Beethoven, and renowned throughout Europe as one of the greatest pianists of his day, a sought-after teacher who instructed some of the most distinguished 19th-century virtuosi, the author of an influential treatise on the art of pianism, and himself the composer of over three hundred works covering all musical genres (apart from the symphony).

This 20-CD Edition provides a cross-section of Hummel’s excellent, prolific and unjustly neglected output, with a large section of solo piano music including the complete sonatas and etudes and a rich selection of chamber music featuring violin, viola, cello, flute, and guitar with piano, as well as larger ensembles from piano trios to septets.

Though not a symphonist (perhaps not wishing to compete in that arena with the undoubted genius of his contemporary Beethoven), Hummel had great skill with the orchestra, as this set proves with his many concertante works, all rivalling the well-known Trumpet Concerto, among them concertos for piano, piano and violin, bassoon, mandolin, violin (unfinished, completed by conductor–composer Gregory Rose) and the Introduction, Theme and Variations Op.102 for oboe and orchestra.

Haydn’s recommendation of Hummel for the post of Konzertmeister at the court of Prince Esterhazy was the beginning of eight turbulent years at Eisenstadt. Fiercely independent, Hummel found fitting in with the manners and politics of the court difficult, and yet this was a very productive time. All his sacred music – represented on this set by a Te Deum, a Solemn Mass, the offertory Alma Virgo and the oratorio Der Durchzug durchs rote Meer for soloists, choir and orchestra – and several dramatic works including the opera Mathilde von Guise were composed during this period.