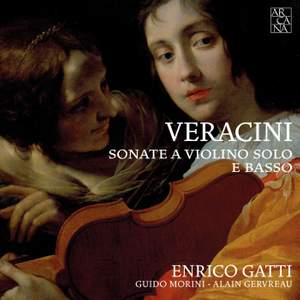 Of the many important anniversaries occurring in 2018, it is worth remembering the 350th death anniversary of the violin virtuoso Francesco Maria Veracini. What better occasion to (re-)discover Enrico Gatti’s first reference recording for the label Arcana?

The fierce Florentine violinist played throughout Europe leaving indelible marks in towns such as Dresden, London, Frankfurt and Prague. His violin sonatas show a lively imagination and personal verve combined with a brilliant instrumental technique.

This CD presents a selection from the two volumes of violin sonatas: two chamber sonatas from Op.1 (1721), a collection of 12, divided into six chamber sonatas containing Ouvertures or Preludes followed by suites of dances and six church sonatas in five movements, where the violin part is notably more daring than in Corelli’s austere style, and two from the Academic Sonatas, op.2 (1744), distinguished not only for the originality and excellence of the music, but also for the presence of dynamic signs and unusual performing indications, a frequent use of the long bowing typical of the Italian virtuosi, an abundant variety of bow strokes and idiomatic inventions of great effect.