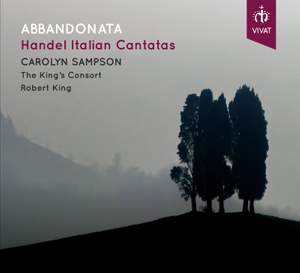 Yes, her instrument is glorious and her readings exquisitely crafted, but it’s her carefully selected and interconnected musical choices that truly set her apart. This new recording exemplifies... — BBC Music Magazine, Christmas Issue 2018, 4 out of 5 stars (Performance)/5 out of 5 stars (Sound) More…

The soprano talks to Katherine about her recording of four of Handel's Italian cantatas, including Armida abbandonata and Agrippina condotta a morire, released on Vivat in October.

Acclaimed soprano Carolyn Sampson, partnered by Robert King and The King’s Consort, with whom she has been associated throughout her professional career, turns her talents to Handel’s two most dramatic cantatas, linked by the theme of abandoned women.

During his stay in Italy from 1706-10 the young Handel’s eyes and ears were opened wide. Hearing Italian music played by Italian musicians in Italian palazzos, churches and theatres must have been jaw-dropping. Nowhere are those influences more vividly demonstrated than in his early Italian cantatas.

In Armida abbandonata the heroine tries, and fails, to abandon the love that has abandoned her. Storms, passion, monsters, yearning, heartache, anguish and finally resignation are all portrayed in this strongest of cantatas. Even more powerful emotions are conjured up in Agrippina condotta a morire. The mother of the crazed emperor Nero is ruthless, ambitious, scheming, domineering, violent and beautiful. Realising that she has been betrayed by her own son, her emotions swing through disbelief, injustice, fury, resentment, grief, betrayal, resilience, pride, self-pity, humiliation, thwarted vengeance and finally come to resignation. Handel pushes all the boundaries, showing techniques that were to be incorporated into his works for decades to come in music of astonishing originality.

Yes, her instrument is glorious and her readings exquisitely crafted, but it’s her carefully selected and interconnected musical choices that truly set her apart. This new recording exemplifies Sampson’s rare sensibility, as both performer and intellectual…The sexiness of Armida, the silliness of Icarus, the shiftlessness of Agrippina are implicit in his score; Sampson’s performance, and that of the King’s Consort, makes this splendidly explicit.

Sampson’s credentials as a superb Baroque stylist hardly need stressing. In Tra le fiamme and the rarely heard Figlio d’alte speranze…she sings with her familiar grace of phrase and ease of coloratura. Crucially, too, she musters a true trill. Beyond this, Sampson subtly caries her naturally limpid tone in response to the dramatic situation…Here is a disc that can be enthusiastically recommended to Sampson’s many admirers and Handel lovers alike.

Sampson is hard put to better the stunning intensity of the disc’s second track, Ah! crudele, from the best-known cantata, Armida abbandonata, though the drama of the longer Agrippina condotta a morire runs it close, full of vicious recriminations, as the empress is led to her death, which elide the differences between arias and recitatives with passionate conviction. Strong support from Robert King and the King’s Consort, especially leader Kati Debretzeni.