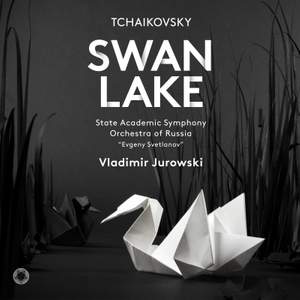 Jurowski lacks nothing in terms of passionate commitment – the impact of his recording, especially when the SACD surround-track is activated, is all-engulfing – and conjures up a compelling emotional... — BBC Music Magazine, January 2019, (Performance) / (Recording) More…

Swan Lake is the first of the three great ballets that Tchaikovsky wrote, and arguably the most famous. The piece is mainly known in the shape it obtained in 1895, when it became a classic in the choreography of Marius Petipa and Lev Ivanov. That “imperial” version strayed from Tchaikovsky’s world premiere score, with several cuts, abridgments and displacements. This high definition recording presents the work as it was heard during the 1877 world premiere performance, highlighting the extraordinary symphonic qualities of Tchaikovksy’s original conception.

Jurowski lacks nothing in terms of passionate commitment – the impact of his recording, especially when the SACD surround-track is activated, is all-engulfing – and conjures up a compelling emotional narrative.

This is a terrific new account. Jurowski’s ‘Svetlanov’ Orchestra – basically the old USSR State Symphony – really has this music coursing through its veins. The orchestra still has a distinctly Russian flavour, even if the paint-stripper brass and acidic oboe of yore have been polished up…Make no mistake: Jurowski’s Swan Lake is up there with the very best.

Jurowski emphasises the dark, tragic qualities of the score, but never at the expense of its exhilarating momentum and orchestral audacity.

Jurowski’s finely-tuned ear and his sense of detail coupled with an urgency to his music-making comes through in spades here. Each movement holds its own character, but there is also a palpable feeling that Jurowski is working on the large-scale, too. Two super-long SACDs, superbly recorded with radiant playing make this a must.