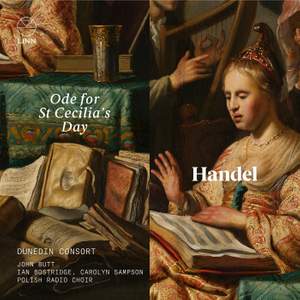 You should catch Carolyn Sampson, Ian Bostridge and the Dunedin in this Handel masterpiece. They glide through the score in utterly ravishing ways that transcend rival recordings…Butt’s tempos... — BBC Music Magazine, Christmas Issue 2018, 4 out of 5 stars More…

V. Accompagnato. When Nature Underneath a Heap

XII. Aria. But Oh! What Art Can Teach

XV. Solo and Chorus. As from the Pow’r of Sacred Lays

• Bostridge demonstrates the technical mastery and vocal precision that has seen him win many of the major international record prizes in his twenty-five year career.

• Led by John Butt, with singers from the Polish Radio Choir, this rich and colourful tribute to music’s patron saint is the latest in their muchlauded Handel discography, which includes Messiah, Acis & Galatea and Esther, each recording having won widespread acclaim.

• The recording is completed by Handel’s Concerto Grosso in A minor Op. 6 No. 4, in which Dunedin Consort’s exceptional instrumentalists take centre stage.

“They offer a dramatic immediacy of expression that scarcely any choir can match.” Choral Journal

“Handel's score abounds with remarkable beauty, however, and this performance radiates life and personality.” The Sunday Herald

“…what counts is its joyous spirit and the way it matches the high level of Handel's inspiration.” Financial Times

You should catch Carolyn Sampson, Ian Bostridge and the Dunedin in this Handel masterpiece. They glide through the score in utterly ravishing ways that transcend rival recordings…Butt’s tempos are daringly slow and his silences perfectly timed, bringing out the terse beauty of Handel’s vocal and instrumental lines. Bostridge bonds music to word-meaning so persuasively that they become a single heartfelt utterance.

[Butt] treads a satisfying path between the detailed, dance-based style of early period-instrument performers like Nikolaus Harnoncourt and the more vigorous manner of Charles Mackerras or John Eliot Gardiner. Everything is at once graceful and uplifting.

In the 15 years since she recorded the Ode with King, Carolyn Sampson’s vernal soprano has acquired richer shadings…her poised, invariably graceful contributions are among the disc’s prime pleasures…Bostridge, in fine, robust voice, never lets you forget that something urgent is at stake…Under Butt’s lively and sympathetic direction (which includes properly shaped bass lines), both framing choruses generate an apt Handelian majesty.

Augmented by the Polish Radio Choir, this full-blooded reading of Handel’s great hymn to the patron saint of music plays out on a larger scale than we’re perhaps used to from Butt and his Dunedin forces, to powerful and frequently moving effect: there’s a sardonic glint behind Bostridge’s apparent paeon to the bellicose effects of martial music, whilst Sampson provides balm with a beautifully fluid account of ‘What passion cannot music raise and quell!’.

Butt’s reading with the Dunedins and the Polish choir has irresistible sweetness, with the tenor Ian Bostridge and the soprano Carolyn Sampson on top form.

Ian Bostridge adds his plangent imagination to Dryden’s vivid conjuring of music as the power that raises chaos into harmony, while Sampson’s “What passion cannot music raise and quell” is vividly touching.

The work packs a powerful punch in these hands, and nowhere more so than when Bostridge combines with the chorus in the aria hymning “the double, double, double beat/Of the thund’ring drum”.