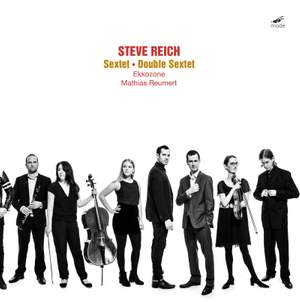 This release couples two of Reich’s “sextets” for the first time: the Sextet of 1984 and the Pulitzer Prize winning Double Sextet of 2007.

A striking difference between the two pieces is that the rhythmic world of Sextet mostly consists of a single-meter grooving, while Double Sextet works in the angular, off-kilter shifting meters reminiscent of Reich’s Tehillim (also of Stravinsky). Ekkozone impart a uniquely chamber music feel and color to these works while maintaining their propulsive character.

Danish percussionist and conductor Mathias Reumert lives and breathes contemporary classical music. An in-demand soloist, he explores new percussive territory while remaining a committed interpreter of yesterday’s masterworks. As creator and leader of the acclaimed ensemble Ekkozone, he explores the bounderies between classical, world and experimental music in performances at rock and jazz festivals.

Ekkozone is a Danish crossover ensemble that masterfully explores the lines between classical, world and experimental music. Formed by Mathias Reumert in 2013, the ensemble enjoys a special connection with Reich’s music and has performed a large part of his oeuvre, including several performances of Music for 18 Musicians.