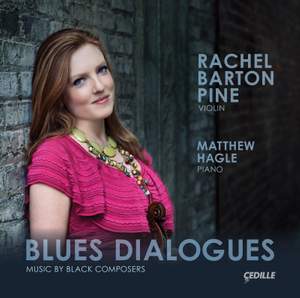 It is a diverse and enjoyable programme. — Financial Times, 4th January 2019, 4 out of 5 stars More…

DaCosta: A Set of Dance Tunes for Solo Violin

No. 1, Walk Around "Brudder Bones"

No. 3, Little Diamond - Bird on the Wing Jigs

Violinist Rachel Barton Pine, 'an exciting, boundary-defying performer' (Washington Post) known for her 'bravura technique and soulful musicianship' (New York Times), headlines a groundbreaking album of blues-influenced classical works for violin and violin and piano by 20th and 21st century composers of African descent. World-premiere recordings include Noel Da Costa’s A Set of Dance Tunes for Solo Violin, based on American fiddle tunes; Daniel Bernard Roumain’s Filter, which conjures the sounds of electronic dance music and psychedelic guitar; Errollyn Wallen’s Woogie Boogie, a humorous and inventive re-imaging of the boogie-woogie blues dance; and Billy Childs’s Incident on Larpenteur Avenue, a single-movement violin sonata / tone poem written as a response to a fatal shooting by police. Another premiere is Wendall Logan’s violin and piano arrangement of Duke Ellington’s 1935 composition, In a Sentimental Mood.

It is a diverse and enjoyable programme.

What a fascinating, beautiful disc… The disc’s title is valid: these really are ‘dialogues’ in the most creative and stimulating sense…Need it be said that Pine plays everything here gloriously… Listen to how unaffectedly she outlines the melody of Still’s central slow movement…In passages of virtuoso display, she’s as sure-footed and as agile as an acrobat.