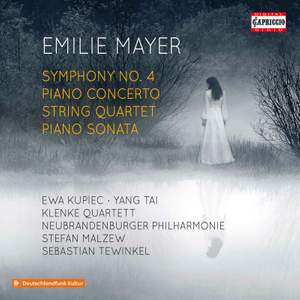 A welcome disc of works by the German Romantic composer. The performances are robust; the symphony a discovery. — BBC Music Magazine, January 2019, 4 out of 5 stars

Mayer, E: March in A major

Miss E. Mayer is a rare phenomenon… Here we have a female composer writing not merely for the pianoforte, but also tackling the difficult task of orchestral composition with all its numerous intricacies. And how she succeeds!' - Neue Berliner Musikzeitung, 1878. In German-speaking regions, it was Clara Schumann and Fanny Hensel who established themselves as composers of significance. At the turn of the 20th century, it was Amy Beach in the USA and, even more so, Ethel Smyth in Great Britain who became icons of the women’s movement in music. Still to be recognised is the music of the German Romantic Emilie Mayer. At the age of five, she was already receiving piano lessons; by the early 1840s none other than Carl Loewe in Stettin was her teacher. Her works are cast in familiar classical forms, but with a sustained focus on colour and innovative turns, making her one of the most important female representatives of central European music in the 19th century.

A welcome disc of works by the German Romantic composer. The performances are robust; the symphony a discovery.