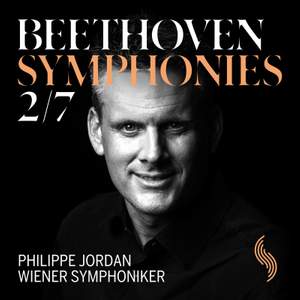 Jordan’s reading [of the Seventh] marries forward motion and unforced articulacy in similar measure [to Weingartner]. The principal strength of his reading is the skill with which the symphony’s... — Gramophone Magazine, December 2018 More…

With this album, the Wiener Symphoniker release the third part of their first Beethoven cycle on CD. The first two releases in the Wiener Symphoniker's first full recorded Beethoven's symphony cycle met with universal acclaim from critics and audiences alike. Now the third part, in the form of Symphonies Nos. 2 and 7, is being released. The CD is part of the Wiener Symphoniker's Road to Beethoven, a project to prepare for the year 2020, the 250th anniversary of the composer. Both the first CD with Symphonies Nos. 1 and 3 and the second with Nos. 4 and 5 have been picked as 'CD of the month' by various international music magazines. Based on these releases, the British Gramophone magazine nominated the orchestra for 'Orchestra of the Year 2018'. In particular, the magazine praised Jordan's approach of combining the classic Viennese sound with a more modern, leaner interpretation, original tempos and insights from historically informed performance. For Jordan, the content of the music was paramount. His goal was not to revere Beethoven as a monument but rather to present him in a more 'natural, direct and personal' way.

Jordan’s reading [of the Seventh] marries forward motion and unforced articulacy in similar measure [to Weingartner]. The principal strength of his reading is the skill with which the symphony’s metric jigsaws are clarified and purveyed by an orchestra whose sound has been sharpened…All of which makes for an essentially ‘classical’ reading…Jordan gives a superb account of [the Second]: rhythmically vital yet showing sufficient regard for the old cantabile style to allow the music to sweep by with a flower in its buttonhole.

These live recordings offer bright-eyed performances, with carefully contoured balance between the woodwind and brass and strings: Beethoven viewed from a classical perspective, rather than the post-Wagnerian angle one might expect from the grander Vienna Philharmonic.

Philippe Jordan is very convincing in his choice of tempos – each movement sounds very comfortable.

These are overwhelmingly positive, uplifting performances, superbly played to boot... If anyone tells you that the even-numbered symphonies aren't as good as the rest, shove this disc in their direction.