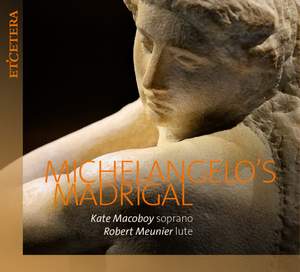 Macoboy and Meunier shine a valuable light on songs by 15th- and 16th-century Italian composers setting a variety of poets. There’s a beautiful sense of intimacy here. — BBC Music Magazine, November 2018, 4 out of 5 stars More…

Soprano Kate Macoboy and lutenist Robert Meunier again join forces on this recording to present music from the Italian Renaissance. We are perhaps more familiar with Northern European composers working in Italy in the decades before and after 1500 than we are with Italian composers from the same period.

Names such as Josquin des Prez, Alexander Agricola, Loyset Compere and Jacob Obrecht were masters of liturgical polyphony, masses and motets. Their art could be heard in monasteries, cathedral chapels, papal and some princely chapels.

However, when it comes to secular music, Italian composers and musicians were in demand the most, from papal employment in Rome and the northern courts of Mantua and Ferrara to the merchant houses on the Grand Canal in Venice. Singer/lutenists such as Bartolomeo Tromboncino, Marchetto Cara and Michele Pesenti as well as lutenists Marco dall’Aquila and Francesco da Milano were household names in these centres.

Lauded by the critics as ‘Really high quality’ (Gramophone Magazine); “Very well executed... a quality performance” (BBC Arts Online), Macoboy and Meunier themselves say of this recording: “Paradoxically, we characterise the songs to twenty-first century audiences by going back to the Renaissance itself. Like the great artists of the time, the musicians found inspiration in antiquity, and sought to recapture the legendary power of ancient Greek music to arouse human passions. That emotional power can indeed be experienced in these composers’ own music - but only if it is performed in the style in which it was performed in their own time. By drawing on little-known Renaissance sources on performance practice, we give their songs something of their original force and freshness.”

Macoboy and Meunier shine a valuable light on songs by 15th- and 16th-century Italian composers setting a variety of poets. There’s a beautiful sense of intimacy here.

Robert Meunier proves an able accompanist and an accomplished soloist in the works for lute alone, while Kate Macoboy has a pleasant well-focused soprano voice...Macoboy introduces an appropriate level of dramatization into her performances, and this along with the accumulation of ornamentation prevents the often rather simple melodies outliving their welcome.

It’s a very well-constructed programme…the conception is so sympathetic…Kate Macoboy’s timbre is most attractive.

The text is in the centre, and both Kate Macoboy and Robert Meunier aim for a personal treatment of the text. This is a very intimate recital: one has the feeling of being close to the artists, who sing and play specially for you…This is a wonderful disc which requires attentive listening. Only then can the depth of these songs be fully appreciated.

It’s clear from both the precision and the easy-going sprezzatura of these performances, and from Meunier’s extensive booklet-note…that this disc is the fruit of many years’ work…Macoboy’s voice is crystal clear and her diction exemplary…and Meunier’s accompaniments unfussy and responsive (his solo tracks are outstanding).