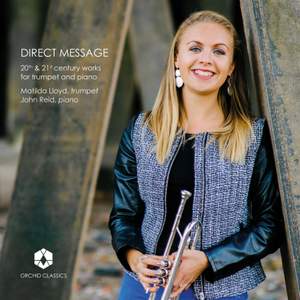 Pritchard, Deborah: 7 Halts on the Somme (Version for Trumpet & Piano)

No. 3, Pozières. The Moulin

No. 5, The Sucrerie. Longueval

Matilda Lloyd is a fast-rising star of the trumpet world, having won the BBC Young Musician of the year Brass Final as well as the Eric Aubier International Trumpet Competition, and having made an impressive solo debut at the BBC Proms. Matilda's debut album reflects her desire to broaden the trumpet repertoire, with no fewer than three works recorded for the first time, by composers Giles Swayne, Deborah Pritchard and Alex Woolf. Also included on the recording are forgotten works of the 20th and 21st centuries by Jacques Castérède and Raymond Gallois Montbrun alongside staples of the trumpet repertoire, such as Enescu's Légende and Peter Maxwell Davies's impressive showpiece, Sonata for Trumpet and Piano Op.1.