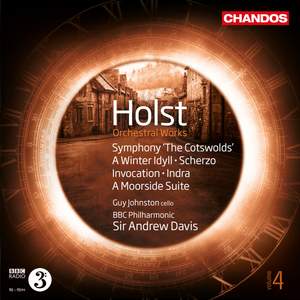 This latest instalment of Chandos’s survey of Holst’s orchestral works is far more than a predictable beachcomber’s delight. The quality of the performances is a feast in itself, the BBC Philharmonic... — BBC Music Magazine, Christmas 2018 More…

Five years after the highly-praised release of Volume 3, Sir Andrew Davis returns to his exploration of Holst’s orchestral works with the brilliant BBC Philharmonic, a series initiated almost ten years ago by the late Richard Hickox, then taken over by another expert in British repertoire. This selection of orchestral works by Holst provides a remarkable overview of his career, ranging from such early works as A Winder Idyll – composed in 1897 when he was still studying at the Royal College of Music – to the Scherzo of a symphony on which he was working towards the end of his life. None of the music recorded here was published in his lifetime, and the Scherzo – rarely heard though it is – is the only work to have entered the repertoire. ‘A Moorside Suite’, originally written for brass band, is featured here in the composer's rarely heard arrangement for strings.

This latest instalment of Chandos’s survey of Holst’s orchestral works is far more than a predictable beachcomber’s delight. The quality of the performances is a feast in itself, the BBC Philharmonic playing with world-class precision that exactly matches the ceaseless quest for clarity in Holst’s idiom. The recorded sound, too, conveys needlepoint detail within a natural-sounding, non-clinical ambience.

Beautifully performed by the BBC Philharmonic, Holst’s brilliant orchestral technique and imagination are expertly finessed by Davis who has, beyond any shadow of doubt, stepped into the shoes of Boult, Barbirolli, Handley, Braithwaite, Thomson and Hickox as a true champion of British music of the late 19th and 20th centuries.

Guy Johnston captures its wistful, yearning quality to perfection, surfing the music’s impassioned dynamic range with a beguiling, velvet sonority that opens out thrillingly in moments of special intensity.

We look forward to the next volume with eager anticipation.

Remarkably translucent SACD sound distinguishes this latest addition to a highly collectable Holst series. None of the music recorded here was published in his lifetime, but all of it is worthy of the attention of Holstians.