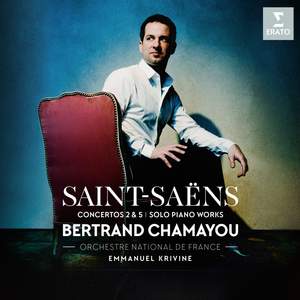 The nimbleness and fluidity of his playing is remarkable. It’s a zingy performance (of the Second Concerto) all round, with a vigorous performance from the Orchestre National de France, conducted... — BBC Music Magazine, November 2018, 4 out of 5 stars More…

The French pianist talks to Katherine about his new recording of the Second and Fifth Piano Concertos and a selection of the composer's lesser-known solo piano works, released on Friday on Erato.

Following his award-winning survey of Ravel’s complete solo piano works, Bertrand Chamayou takes on some of the most brilliant yet fiendishly virtuosic music in the French Romantic repertoire on his new Saint-Saëns album, drawing together the two most famous of the composer-pianist’s five piano concertos – the epic No.2 and the irresistibly exotic No.5 ‘The Egyptian’ – alongside a bouquet of lesser-known solo pieces and études that will delight pianophiles. These include the effervescent yet notoriously difficult Étude en forme de Valse with its breathtaking bravura finale, and the entrancing Les Cloches de Las Palmas inspired by the bells Saint-Saëns heard ringing out in the Canary Islands. ‘I’m always charmed by Saint-Saëns,’ says Chamayou. ‘There’s an attraction to the exotic, the bizarre, sensual fantasy, that’s very curious for a composer that we think of as so academic. And there’s a real sense of voyage in the music of Saint-Saëns that I find fascinating.’ He is joined by the Orchestre National de France and its formidable conductor Emmanuel Krivine for an album that promises fireworks, champagne and just a few puffs of opium.

The nimbleness and fluidity of his playing is remarkable. It’s a zingy performance (of the Second Concerto) all round, with a vigorous performance from the Orchestre National de France, conducted by Emmanuel Krivine…The recording is rounded off with a handful of solo pieces…There are some beautiful gems here.

I would go as far as placing Chamayou and Krivine at or near the top of the myriad recordings [of Concerto No. 2] currently available...his pianissimo-leggiero and jeu perlé playing are quite masterly.

[Concerto No. 2] Chamayou and Krivine give a sparkling performance, full of wit and grace, highlighting the dramatic passages in a performance as good as any I have heard. Their account of the Egyptian Fifth is equally impressive, perhaps marginally outpointing Hough and Oramo. With terrific sound, this is a highly recommendable release.

In the Second Concerto [Chamayou] is by turns dramatic and captivatingly tender as required, with excellent support from conductor Emmanuel Krivine and the Orchestre National de France, who bring out the Brahmsian qualities of the first movement and a Tchaikovsky-like lightness of touch to the second movement.