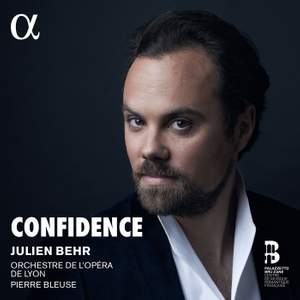 Lesser-known French Romantic repertoire is brought to shimmering light thanks to Behr’s honeyed vocals and the luxuriant accompaniment. — BBC Music Magazine, January 2019, 5 out of 5 stars More…

The French tenor Julien Behr is one of today’s rising vocal stars. Voted ‘Révélation artiste lyrique de l’Adami’ in 2009, the year he made his international debut at the Festival d’Aix-en-Provence, he has become famous for his Mozart roles (including Don Ottavio in Don Giovanni, recorded live at the Théâtre des Champs-Élysées in 2016 under the direction of Jérémie Rhorer, Alpha379).

It is the French Romantic repertory composed between 1800 and 1900 that the tenor has chosen for his first recital disc. A wide variety of works (both grand opéra and opéra-comique), famous arias and absolute rarities make up this programme devised by the Palazzetto Bru Zane and Alexandre Dratwicki, who writes in the booklet that accompanies the CD: ‘Nothing is more difficult for a tenor than “finding his voice” in this imbroglio of genres and institutions... Already much admired for his charismatic vocal style and personality, the tenor Julien Behr is now the hero of a recital that revisits this repertory in all its variety, ranging from tenderness to heroism, from joy to melancholy.’

The programme takes in Ambroise Thomas (Mignon, after Goethe), Bizet and his famous La Jolie Fille de Perth, Cinq-Mars (1877) by Gounod, Benjamin Godard (Jocelyn), André Messager and his splendid Fortunio (1907), Delibes (Jean de Nivelle and Lakmé, with Gérald’s celebrated aria) and Le Chevalier Jean (1885) by Victorin Joncières (one of the first Wagnerians) among others. French versions of two extremely well-known numbers by Franz Lehár from The Merry Widow and The Land of Smiles – the title track ‘Je t’ai donné mon coeur’ (‘You are my heart’s delight’) – complete this panorama magnificently supported by the Orchestre de l’Opéra National de Lyon and conducted by another rising star, Pierre Bleuse.

Lesser-known French Romantic repertoire is brought to shimmering light thanks to Behr’s honeyed vocals and the luxuriant accompaniment.

He has an attractive voice, with a touch of metal in the sound under pressure, an easy ring at the top and a beguiling warmth of tone when singing softly.