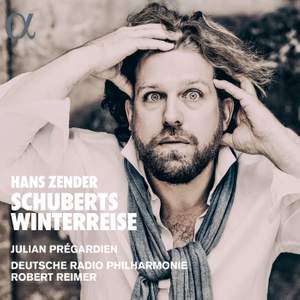 The playing is exemplary, and the beautifully balanced recording allows every textural and coloristic shift to register…Prégardien sings with wonderful elegance and unforced sincerity of expression,... — Gramophone Magazine, December 2018 More…

The German tenor talks to Katherine about recording Zender's 'composed interpretation' of Schubert's great song-cycle, out now on Alpha.

The tenor Julian Prégardien joins Alpha for several recording projects that will showcase every facet of his talent, notably lieder and oratorio. His first album on the label is devoted to one of the greatest masterpieces in the history of music, Winterreise, but in a version with orchestra composed by Hans Zender in 1993. He scored the work for orchestral forces very different from the ensembles used in the nineteenth century (including, for example, a soprano saxophone, an accordion, a harmonica, a wind machine, a guitar and a very large percussion section).

Hans Zender describes his work as a ‘creative transformation’: ‘My own reading of Winterreise does not seek a new expressive interpretation, but systematically takes advantage of the freedoms that performers normally allow themselves in an intuitive way: slowing down or accelerating the tempo, transposition into different keys, emphasising and nuancing colours.’

Following a staged production of this version of the work, Christian Merlin wrote in Le Figaro in 2018: ‘A spellbinding Winterreise... The tenor Julian Prégardien, at once an exceptional singer and a committed actor, gives an incendiary performance combining vocal expressiveness, loving attention to the words and theatrical presence with sensitivity and intelligence in equal measure.’

The playing is exemplary, and the beautifully balanced recording allows every textural and coloristic shift to register…Prégardien sings with wonderful elegance and unforced sincerity of expression, which makes his swerves into Sprechgesang all the more shocking. He’s a lighter-voiced, more impulsive protagonist than his father…You might have qualms about the work itself but it’s hard to imagine it more compellingly done.

I’ve been fascinated by Hans Zender’s expressionist re-imagining of Winterreise (which orchestrates and occasionally fragments Schubert’s original) since seeing Ian Bostridge’s Cabaret-esque performance at the Barbican two years ago; Prégardien plays it far straighter but is every bit as compelling, particularly in more lyrical songs such as Der Lindenbaum and Die Nebensonnen. Look out for my interview with him about the recording next month.

Zender transfers Schubert’s piano part to a small orchestra of classical instruments...The material is basically all Schubert’s, but as the narrator continues down the road to madness, the familiar music blurs in and out of focus, stretches, slithers – or careers into an expressionist rant... It’s very well sung by Prégardien, who balances control and vulnerability persuasively.