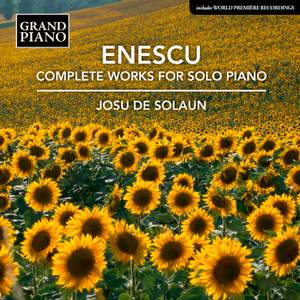 Enescu: Barcarolle in B flat major

Enescu: Impromptu in A flat major

This set of George Enescu’s solo piano music traces a fascinating musical arc from his precocious years in Vienna and Paris, where he absorbed Brahmsian and French late-Romantic influences, notably in the Impromptus, to the brilliantly mercurial Piano Sonata No. 3. Whether in the Pièces impromptues, eloquent character pieces, or in the oceanic Piano Sonata No. 1, Enescu remains, in Pablo Casals’ words, 'the greatest musical phenomenon since Mozart', his unique musical language embracing Bach as well as the abiding vitality, and melancholy, of his native Romanian folk music.