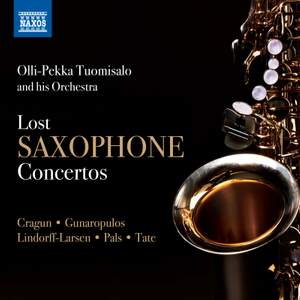 Olli-Pekka Tuomisalo and his orchestra

A large number of saxophone concertos have been written, but only a handful are regularly performed. With these premiere recordings Olli-Pekka Tuomisalo showcases five works that, had circumstances been different, might easily have established themselves as repertoire pieces. John Beach Cragun’s beautifully voiced work is the first saxophone concerto by an American and, like Yrjö Gunaropulos’ concerto – which enjoyed celebrity in the 1930s – was only rediscovered in 2016. The concertos by Eilert Lindorff-Larsen and Leopold van der Pals are compact, varied and exciting, while that by Phyllis Tate is considered her first major work.