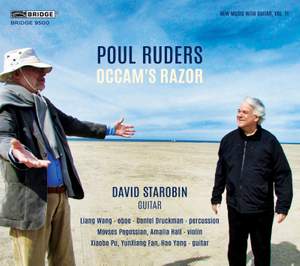 Starobin, without doubt one of the world’s greatest exponents of the guitar, has known Ruders for over 30 years and something of longstanding relationship…is celebrated in this enterprising and... — Gramophone Magazine, October 2018 More…

Occam's Razor features recent music composed for American guitarist David Starobin by the Danish composer Poul Ruders. During the past 30 years Ruders has composed a steady stream of new music for Starobin, including solo guitar music, chamber music and two guitar concertos. Joining David Starobin on this recording are an international cast of musicians including the New York Philharmonic’s principal oboist, Liang Wang, New York Philharmonic percussionist, Daniel Druckman, Armenian violinist Movses Pogossian, New Zealand violinist Amalia Hall, and Chinese guitarists Xiaobo Pu, YunXiang Fan and Hao Yang. Critic Allan Kozinn on Starobin's new disc: 'No guitarist has done as much to extend his instrument’s modern repertory as David Starobin ... one of the composers who has responded most prolifically to Starobin’s request for new works has been Poul Ruders, whose imaginative solo and chamber works are consistently lively and entertaining'.

Starobin, without doubt one of the world’s greatest exponents of the guitar, has known Ruders for over 30 years and something of longstanding relationship…is celebrated in this enterprising and fascinating release…The performances throughout are wonderfully vivid and musical.