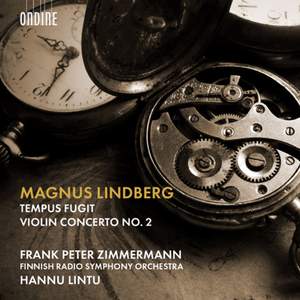 Under Hannu Lintu, the Finish Radio Symphony Orchestra plays with such clarity and insight that is feels like a beautifully balanced clockwork mechanism – albeit one with a mightily exuberant... — The Strad, November 2018 More…

Violin Concerto No.2, written for Frank Peter Zimmermann, was composed during Lindberg’s tenure as the composer-in-residence for the London Philharmonic Orchestra. This three-movement work demonstrates Lindberg’s lush orchestral style and is reminiscent of the great romantic violin concertos of the past. The concerto has three movements played without a break, with a solo cadenza towards the end of the second movement. The music is at times lucid and bright and at times lusciously sonorous, and the soloist is called upon to display both fireworks and soaring melodic arcs.

Tempus fugit was commissioned by the Finnish Radio Symphony Orchestra and premiered at the gala concert for the centenary of Finland’s independence in Helsinki on 6 December 2017. Tempus fugit is a nearly 30-minute orchestral work embracing an Impressionist brightness of colour, melodic lines and a warm Romantic glow. The work is dedicated to Hannu Lintu.

Under Hannu Lintu, the Finish Radio Symphony Orchestra plays with such clarity and insight that is feels like a beautifully balanced clockwork mechanism – albeit one with a mightily exuberant spirit.