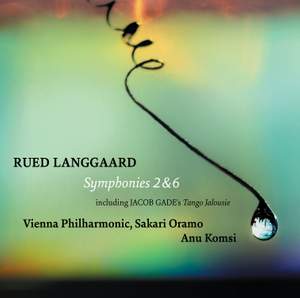 Oramo and the Vienna Philharmonic [take] on two contrasted works by Rued Langgaard that illuminate this composer in all his stylistic diversity and recklessness...Such an idiom should be in this... — Gramophone Magazine, November 2018 More…

The conductor of the Wiener Philharmoniker talks to David about his new album of works by the forgotten Danish Romantic composer Rued Langgaard.

Read our exclusive interview with Sakari Oramo about the recording here.

Rued Langgaard (1893–1952) was the major Danish late-Romantic composer who did not gain recognition in his mother country. His greatest successes took place in Germany and Austria, where his Symphonies Nos. 2 and 6 were met with considerable acclaim. Back home, he never received that kind of backing. He died a careworn and despairing individual. On this recording with one of the world's leading orchestras, the tradition-conscious Vienna Philharmonic, one is therefore able to hear Langgaard's music 'return home' to a central European musical culture. At the same time things were going swimmingly for his colleague Jacob Gade (1879–1963) whose Tango Jalousie has become the absolutely most frequently played piece of Danish music for almost a century.

Oramo and the Vienna Philharmonic [take] on two contrasted works by Rued Langgaard that illuminate this composer in all his stylistic diversity and recklessness...Such an idiom should be in this orchestra’s blood and the VPO do not disappoint – whether in the lyrically effulgent initial movement, with its discreetly modified sonata form, or the lithe finale...A mandatory purchase for its interpretative insights, committed playing and tangibly realistic sound.

Breaking news: Oramo’s new recording is one of the best things I’ve heard all year. Of his fillers, the gentle meditation Upaagtede Morgenstjerner (Unnoticed Morning Stars) is most welcome. First, it reminded me what a passionate, powerful and endearingly quixotic talent Langgaard was, and how much joy there is in his work. Second, it’s demonstrated that, in their various ways, all the albums do justice to these underrated symphonies. And third, it’s highlighted the sheer consistency and musical value of that Dausgaard box. Two fine symphonies, very well played and recorded; a cheer-raising, hat-tossing event for all Langgaardians.

It’s a joy to find the Vienna Philharmonic, under Sakari Oramo, lending their plushness to his Second Symphony (finished in 1914), one of those endearingly overstuffed affairs bursting with extra horns; a soprano soloist too.