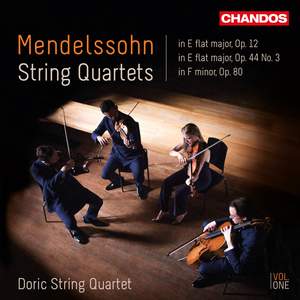 Op. 44/3 is the longest of the quartets, and the outer movements can sometimes come across as prolix. The Doric’s performance steers clear of this trap – again through the controlled variety... — BBC Music Magazine, November 2018, 4 out of 5 stars More…

Alongside its ongoing and much lauded Haydn and Schubert series, both on-stage and on-record, the Doric String Quartet with this Mendelssohn album is adding a new milestone in its repertoire. Mendelssohn wrote and published these three quartets at very different stages in his life and they therefore outline the complete trajectory of his creative output. The early Op. 12, also called No. 1, was composed in London and includes many musical allusions to Beethoven, dead only a few years before its composition. These subtly contrast with Mendelssohn’s genially flowing energy. While Op. 44 No. 3, which incorporates many deft variations, developments, and combinations, follows an extended honeymoon tour and Mendelssohn’s twenty-ninth birthday, Op. 80 emerged from a bout of helpless depression after the sudden death of Mendelssohn’s older sister and confidante, Fanny. Mendelssohn described this quartet as a Requiem, and the nervous agitation often found in his music here bursts forth with full force.

Op. 44/3 is the longest of the quartets, and the outer movements can sometimes come across as prolix. The Doric’s performance steers clear of this trap – again through the controlled variety and technical ease of their music-making – as well as tripping the light fantastic in the scherzo, and laying bare the emotional ambiguity of the Adagio. I look forward to Volume. 2.

Alex Redington negotiates the first violin part with aplomb throughout, his colleagues match him, technically and expressively, and showcase their own agility. Volume 2 is awaited with eager anticipation.