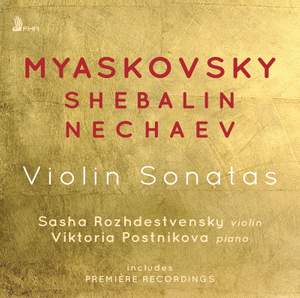 Violinist Sasha Rozhdestvensky (son of the late conductor), rather close-miked as if in a 1950s recording, plays fluently though not, perhaps, drawing the music’s last ounce of expressive meaning.... — BBC Music Magazine, ****/*** More…

The three violin sonatas on this disc are premiere recordings of rarely heard mid-Twentieth century Russian repertoire, performed by a mother and son partnership from a famous Russian musical family. The composers of these works had enjoyed a direct professional relationship during the period between the two world wars, mainly through their involvement on the teaching staff at the Moscow Conservatoire: Myaskovsky, Shebalin and Nechaev.

Despite being one of Nikolai Myaskovsky's most appealing and approachable later works, his Violin Sonata, Op. 70 remains rarely performed in concert. The work begins with a wistful first movement, followed by the final movement containing a series of 12 Variations on a theme eloquent and restrained by turns.

The following work is by a student, colleague and friend of Myaskovsky, Vassarion Shebalin. Formed in the classically arrayed four-movement design, it shows the composer's musical language at its clearest and most direct.

The final work on this album is by the composer Vasily Nechayev who is hardly known outside of Soviet music circles. His Sonata, Op. 12, shows Nechayev was aware of stylistic developments pursued by Bartok and Prokofiev in its richly whole-tone harmonies and its motoric rhythms.

Violinist Sasha Rozhdestvensky (son of the late conductor), rather close-miked as if in a 1950s recording, plays fluently though not, perhaps, drawing the music’s last ounce of expressive meaning. His mother Viktoria Postnikova provides idiomatic accompaniment in [the Violin Sonata] and the accompanying two works.

Few readers will be familiar with these unpretentious and accessible Soviet-era sonatas…The music-making is hard to fault and the sound engineering is always sympathetic even with the violin balanced quite close.