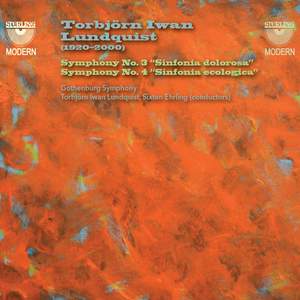 [Symphony No. 3] A half- hour, arch-like one-movement piece, the music has an inexorable quality coupled with an impressive monumentalism, especially as Lundquist manages to integrate jazz references.... — Classical Music, October 2018, 5 out of 5 stars More…

In his symphonic works Torbjörn Iwan Lundquist is using a special technique, in which large form is made from large musical blocks. The third symphony is written in one movement, but you can distinguish three blocks and a concluding part, 'the reminiscence '- in which the accumulated power reverts to the original nothingness in the end The third symphony was begun in 1971 in Jämtland and was completed in 1975 at Saltö in Bohuslän. As in most of Lundquist´s symphonies, this symphony begins with a primal cell, his association theme, a gust of wind, which unfolds into a grandiose sunrise. Nature means a lot for Lundquist. The idea for the Symphony No. 3 - which also had the title Sinfonia dolorosa and is dedicated to the composer’s deceased wife Maud — he got during a mountain hike, shortly after his wife’s death. The symphony was first performed in September 1976 in Malmö, by Malmö Symphony Orchestra conducted by Janos Fürst.

[Symphony No. 3] A half- hour, arch-like one-movement piece, the music has an inexorable quality coupled with an impressive monumentalism, especially as Lundquist manages to integrate jazz references. The performance is gritty, involving and supremely sculpted. [Symphony No. 4] The subtitle refers to the composer’s passion for nature. This symphony invites in more light than its predecessor; the performance is virtuoso. Superb, detailed documentation. Recommended.