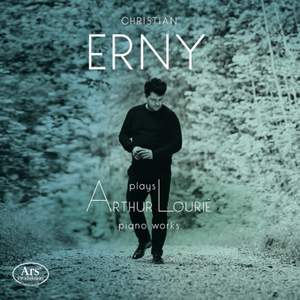 Lourié’s style is hard to pinpoint, with a blend of French and Russian influences. The result is a shimmering disc tracing the young composer’s development. — BBC Music Magazine, August 2018, 3 out of 5 stars More…

Arthur Lourié (1892-1966) is one of the most important representatives of the Russian avant-garde, even though he unfortunately never received the appropriate attention due to emigration, among other things. While his early piano pieces were still linked to Skriabin's late work, the composer soon developed completely new forms of musical discourse, including graphic notation.

Christian Erny assembled a roughly hour-long selection of works that offer a foray into the innovative and fascinating world of Arthur Lourié.

Lourié’s style is hard to pinpoint, with a blend of French and Russian influences. The result is a shimmering disc tracing the young composer’s development.

Yet throughout Lourié’s stylistic evolution, his piano writing falls idiomatically and comfortably under the fingers. Small wonder that more pianists are attracted to Lourié these days, including Christian Erny…The superb surround-sound production makes Erny’s intelligently refined artistry all the more enticing. A beautiful disc.