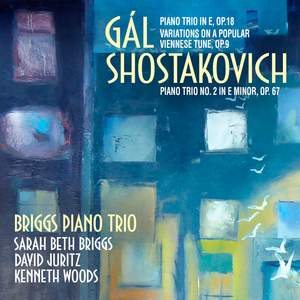 If you think of Korngold, you’ll be in the right area: lush harmonies, soaring melodies and an expert compositional technique. The Briggs Trio responds to the style with enormous affection, following... — BBC Music Magazine, October 2018, 4 out of 5 stars/5 out of 5 stars More…

AVIE continues its acclaimed series of recordings of the music of Hans Gal with the newly formed Briggs Piano Trio performing Gal's lyrical Piano Trio in E and his witty Variations on a Popular Viennese Tune, alongside Shostakovich's harrowing Piano Trio in E minor.

This latest AVIE release brings together two of today's most eminent Gal interpreters, Sarah Beth Briggs and Kenneth Woods with violin virtuoso David Juritz, for a recording of Gal's breathtakingly lyrical Piano Trio in E major, Op.18 and his witty Variations on a Popular Viennese Tune, Op.9. Gal's music and destiny was shaped by war and political upheaval, as was that of Dmitri Shostakovich, whose Piano Trio in E minor, Op.67, one of the monuments of 20th century chamber music, is a harrowing souvenir of the times in which it was written.

If you think of Korngold, you’ll be in the right area: lush harmonies, soaring melodies and an expert compositional technique. The Briggs Trio responds to the style with enormous affection, following the mood changes from passionate to witty with eagle ears, and it sounds as if they have been living with the music for a long time. For capturing their wide tonal and dynamic palette in the recording, the producer and engineer, Simon Fox-Gál – the composer’s grandson – deserves a special mention.

The playing throughout [the Gál] is simply exquisite: yes, it is a beautifully written gift for the three performers; but Briggs, David Juritz and Kenneth Woods make the most of it…The coupling of Shostakovich’s Second Trio provides the greatest possible contrast…Recommended with all possible enthusiasm.

Another new discovery for me this month has been Hans Gál’s 1925 Piano Trio, which receives expansive, ardent advocacy from the newly-formed Briggs Trio; I was expecting something darker and altogether more acerbic from the Austro-British composer, so the open-hearted lyricism and sweeping melodies (shades of Rachmaninov in places) took me quite by surprise. Do give it a try.