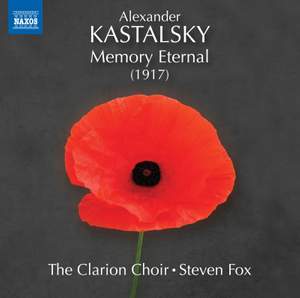 The Clarion Choir’s performance is as ardently passionate as it is immaculate in its balance and pacing. Chants between movements are sung not by a member of the choir but by Leonid Roschko,... — BBC Music Magazine, November 2018, More…

II. Alleluia and with Profound Wisdom

III. Give Rest, O Our Saviour

IV. Give Rest, O Lord, to the Souls of Thy Servants, Who Have Fallen Asleep

V. I Will Pour Out My Prayer

VI. With the Saints Give Rest

VIII. Thou Art God, Who Descended into Hades

In the face of the devastation wrought by the First World War, Alexander Kastalsky conceived a musical service of remembrance for the fallen. A pivotal figure in Russian musical life – he was a student of Tchaikovsky and acclaimed as the founder of a new, national church music – Kastalsky composed a choral-orchestral Requiem, for the concert stage. Simultaneously, he worked on the a cappella version heard on this recording to be sung in Russian Orthodox churches. Following the basic structure of the Orthodox Panihida, or memorial service, Memory Eternal, and the short sacred pieces that end the programme, reveal Kastalsky's masterful use of choral sonority and colour, his weaving of complex polyphonic textures, and his graceful use of ancient chant melodies.

The Clarion Choir’s performance is as ardently passionate as it is immaculate in its balance and pacing. Chants between movements are sung not by a member of the choir but by Leonid Roschko, a protodeacon in the Russian Orthodox Church, adding a gritty- voiced authenticity to this hugely admirable project.

The Clarion Choir, under the sure direction of Steven Fox, turn in a thrilling performance, recorded with clarity and not too much resonance in St Jean Baptiste Church in New York. This recording (together with its publication by Musica Russica) represents the rehabilitation of a major work, which nobody interested in Russian music of the 20th century should miss.

The flawless ensemble of The Clarion Choir, under the inspirational direction of Steven Fox, has been perfectly captured in this demonstration class recording. The balance achieved by the engineers cannot be faulted. The acoustic of St. Jean Baptiste Church, New York confers a captivating aura of resonance, in ideal proportion, upon the compelling music making. I can think of no better advocates for this wonderful music than this superb choral ensemble.