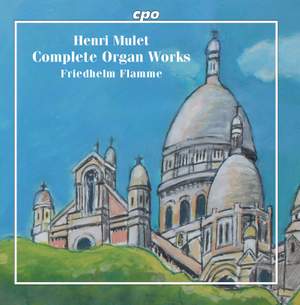 Complete recordings of the delicious Esquisses byzantines, which comprise the first disc, are comparatively rare, so this is a welcome addition. The second disc consists of the remainder of Mulet’s... — Choir & Organ, November 2018, 4 out of 5 stars More…

Esquisses byzantines: No. 9, In Paradisum

Henri Mulet was born in the immediate vicinity of the Sacre-Cœur Basilica in 1878 and studied organ with Charles-Marie Widor and Louis Vierne at the Paris Conservatory. Vierne ranked his student with the "most brilliant of musical personalities" and described him as "an outstanding virtuoso and a very fine improviser". From 1923 to 1931 Mulet was a professor at the Schola Cantorum in Paris; Camille-Saint-Saëns was one of his colleagues, and Gabriel Faure merits mention as one of his first students. Mulet's oeuvre focused first and foremost on the organ, and the Esquisses byzantines composed from 1914 to 1919 and published in 1920 has continued to be his most frequently performed collection of pieces. While the rhythms and meters in most of his pieces – the 'quadrature of the compositional structure' castigated by Richard Wagner – were rather conventional, the harmonies negotiating between Debussy, Wagner, and Vierne are very appealing.

Complete recordings of the delicious Esquisses byzantines, which comprise the first disc, are comparatively rare, so this is a welcome addition. The second disc consists of the remainder of Mulet’s organ output and is a reminder of his ability to produce attractive melodic earworms.