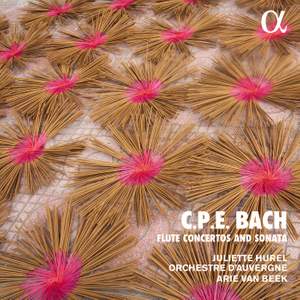 While Carl Philipp Emanuel Bach was above all else a dazzlingly accomplished harpsichordist, his considerable output for flute can easily be explained by the milieu in which he worked for nearly thirty years. The Berlin court of Frederick II was in fact governed by two flautists: the king himself, and his teacher and accredited and exclusive composer, the famous Johann Joachim Quantz. His five flute concertos were derived from a group of seven concertos for harpsichord written between 1747 and 1755. It is very likely that Emanuel Bach himself made all these transcriptions. The versions for flute nearly always date from the same year as the corresponding harpsichord concerto, which suggests virtually simultaneous conceptions. The three concertos selected for this recording have survived in versions for both flute and cello, now in the libraries of the Royal Conservatory in Brussels and the Royal College of Music in London.