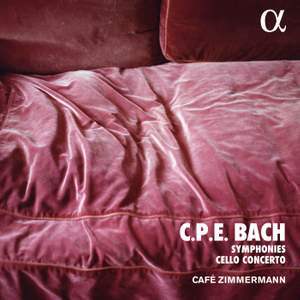 In Carl Philipp Emanuel Bach’s catalogue, the music for solo keyboard and the chamber music occupy central positions. In his youth, Carl Philipp Emanuel, who was left-handed, did not play string instruments such as the violin or viola, but rather the harpsichord and organ (not to overlook the flute). It was as a harpsichordist that, in 1738, he joined the entourage of the future King of Prussia, Frederick II, before following him to Berlin upon his accession two years later and then formally entering his service. In 1767, he was offered the succession of his godfather, Telemann, as director of music in Hamburg. He arrived in the Hanseatic city in March 1768, and for the last twenty years of his life, it was church music that occupied much of his time and effort. The symphonies of Carl Philipp Emanuel Bach are all in three movements, quite often linked without a break. Highly original and typical of north Germany, the symphonies turn their back on the style gallant, on Johann Stamitz, founder of the Mannheim School, and on the Viennese style. The Concerto in A major was originally written for harpsichord and strings, but was later transcribed for cello by the composer, likely for the cellist Christian Friedrich Schale, who hosted a Musikalische Assemblee in his Berlin home every week.