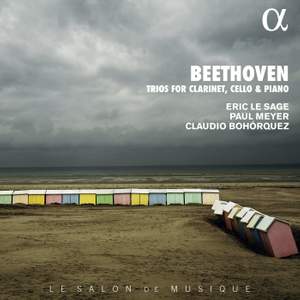 This French-Peruvian/Uruguayan trio make no apologies for [the Trio after the Septet’s] knock-off status and turn in a performance that holds the attention throughout. Played with such commitment,... — Gramophone Magazine, Awards Issue 2018 More…

With this new series entitled ‘Salon de musique’, Alpha presents recordings made by artists who have enlivened the Festival of Salon de Provence for some years now: the pianist Eric le Sage, who has made many recordings for Alpha, the clarinettist Paul Meyer etc… with cellist Claudio Bohórquez, they have now put two Beethoven trios on disc. By 1798, the year Ludwig van Beethoven composed his Trio for piano, clarinet and cello op.11, he was already well-known in Vienna as a remarkable improviser and an ambitious young composer. the piece was clearly aimed at the enlightened aristocracy, as well as competent musical amateurs. This did not prevent the critics, though universally positive, from judging the score to be over-complex in places. Dedicated to the Empress Marie-Theresa of Austria, the Septet was published in 1802 by Hofmeister, and on being well-received it was then rearranged for various combinations. Beethoven himself made a version for clarinet, cello and piano, op.38 in E Flat major – the one recorded here.

This French-Peruvian/Uruguayan trio make no apologies for [the Trio after the Septet’s] knock-off status and turn in a performance that holds the attention throughout. Played with such commitment, the listener is barely given the opportunity to remember how much richer the works sounds in its Septet original, which is surely the mark of a fine performance…Beethoven in determinedly popular mode is always a happy listen and the palpable enjoyment of these players make this a really pleasurable disc.

Both adopt the genial stance for which the clarinet seems particularly well suited...Le Sage, Meyer and Bohorquez give glowing, intelligently shaped performances.