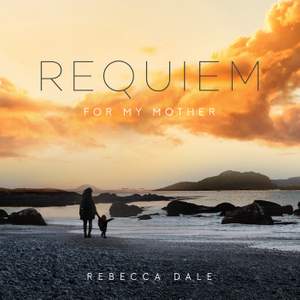 Rebecca Dale: REQUIEM For My Mother

Incorporating lush tonal harmonies and an unabashed lyricism, Dale’s crossover style has won the composer a considerable following. These two works for voices and orchestra are richly cinematic... — BBC Music Magazine, October 2018, 3 out of 5 stars More…

At the heart of Rebecca’s first recording is her Materna Requiem – a beautifully moving and uplifting tribute to her late mother, who died in 2010. The work draws from both the traditional text of the Catholic Mass and contemporary poetry and is a homage to parents everywhere. It features the voices of soprano Louise Alder, tenor Trystan Griffiths and young choristers Hannah Dienes-Williams and Edward Hyde (BBC Radio 2 Young Chorister of the Year 2016) alongside the Royal Liverpool Philharmonic Orchestra. The work will receive its world premiere performance at The North Wales International Music Festival in St Asaph Cathedral on 22nd September.

Rebecca Dale says of the album: “It’s an amazing feeling to be releasing my first album and sharing my music with everyone. The Requiem is a very personal piece to me, and it uses melodies I wrote when I was a child so you could say I’ve been working on it for most of my life! When I first wrote the Requiem I didn’t even realise it would receive a performance so it’s a hugely exciting moment to hear it on record, and I hope the piece connects with people.”

The first track from Rebecca’s new album, ‘Pie Jesu’, is out now and expresses a parent’s love for their son or daughter – so instead of using a child’s voice as is tradition for this movement, it’s represented as a father singing to his newborn.

The process of writing the Materna Requiem has been somewhat cathartic for Rebecca – she describes the musical tribute to her mother as “a way for me to build a bridge back to her”. Rebecca is keen to help others who have suffered the loss of a parent and is a supporter of Winston’s Wish – the UK’s first childhood bereavement charity. Donation buckets will be available at the premiere performance of the work, plus Rebecca will be taking part in ‘TrekFest’ for the charity.

Rebecca’s work first came to public attention when BBC Radio 3 premiered her choral symphony ‘When Music Sounds’ in 2014 and the track, ‘I’ll Sing’, went to No.1 on the Classical iTunes chart. It seems fitting that the whole piece is recorded on her debut album. Performed by the Cantus Ensemble – one of London’s leading chamber choirs – this inspiring orchestral work is a glorious counterpart to the Requiem and concludes the album in stunning style.

Incorporating lush tonal harmonies and an unabashed lyricism, Dale’s crossover style has won the composer a considerable following. These two works for voices and orchestra are richly cinematic in colour but teeter frustratingly between powerful emotional charge and an uncomplicated sentimentalism that may not be to all tastes.

[Materna Requiem] All the performers here give a very moving performance of the work; conductor Clark Rundell has a complete grasp of the idiom and gives Dale the best start for her debut disc. When Music Sounds was premiered on BBC Radio 3 and has lush, descriptive writing and an interesting instrumental part. It is given a fine performance by Nazan Fikret, the Cantus Ensemble and instrumentalists under the baton of Jeff Atmajian.

Echoes of the consonant choral style of Eric Whitacre, Paul Mealor and Patrick Hawes are never far away, often appearing alongside rhythmic bursts of energy and colourful rhythmic bursts of energy and colourful splashes of sound one associates with the film soundtracks of John Williams and Howard Shore. Perhaps Dale’s masterstroke is that she manages to blend these two elements.