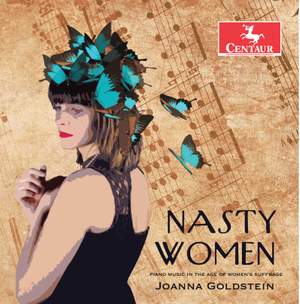 Nasty Women: Piano Music in the Age of Women's Suffrage

Suesse: Afternoon of a Black Faun

Cole: Above the Clouds

Metropolitones: No. 2, Lullaby in the Park

This is an album of important compositions for piano by women composers, composed between the early 20th Century and the 1940s. Joanna Goldstein is Professor of Music at Indiana University Southeast. She was also formerly the Dean of the School of Arts & Letters until 2001. In addition to her piano studio, she directs the Indiana University Southeast Orchestra. Joanna earned her Bachelor of Music degree summa cum laude at Temple University, her Masters of Music at The Juilliard School and a Ph. D. from New York University. She also studied at the Academy for Music and the Performing Arts in Vienna, Austria as a Fulbright-Hays Scholar and has received numerous honors including winning the Philadelphia Orchestra Young Artist Competition on two occasions, the National Arts Club Competition and the Mason-Hamlin Competition.