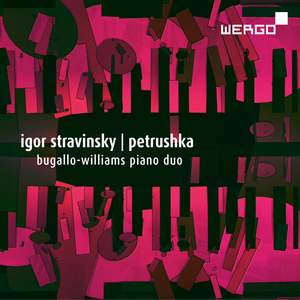 Stravinsky&#39;s two-piano version of Agon is a real rarity. There&#39;s a lot of magic in the Bugallo-Williams’ performance. Jagged fanfares kick-start the ballet, still sounding very much like... — The Arts Desk, September 2018 More…

I. Scene: The Magic Trick

III. Scene: Dance of the Ballerina

IV. Scene: Dance of the Nursemaids

IV. Scene: The Peasant and the Bear

IV. Scene: Dance of the Coachmen and Grooms

IV. Scene: The Mummers – The Fight: The Moor and Petrushka – Death of Petrushka

The young Stravinsky became acquainted with large parts of the Western music repertoire through piano arrangements. That might have been one reason for his later compositional practice to arrange major works for piano duet, or for two pianos. On this new release from WERGO the Bugallo-Williams Piano Duo has achieved its intention to present a complete collection of Igor Stravinsky's published piano arrangements. The present recording contains two ballets which show Stravinsky's compositional development within the genre: the almost film-like burlesque Petrushka as well as the abstract late work Agon which puts the ancient Greek concept of competition into a contradictory musical setting. In addition, it contains two arrangements of concert pieces: Concertino for string quartet lives on the alternation between homogeneous instrumental passages and soloistic crossed accents. The orchestral Scherzo à la Russe as 'jazz commercial' testifies to Stravinsky's adaptation to his life in America as well as to his love of the Russian types of form at the turn of the century. In their recording, Helena Bugallo and Amy Williams present the special charms of Igor Stravinsky's music in 'black and white': the piano arrangements reflect the sheer brilliance of his oeuvre in a concentrated form.

Stravinsky&#39;s two-piano version of Agon is a real rarity. There&#39;s a lot of magic in the Bugallo-Williams’ performance. Jagged fanfares kick-start the ballet, still sounding very much like trumpets here, and the famously off-beat “Gaillard” retains its charms. It's a lot of fun.