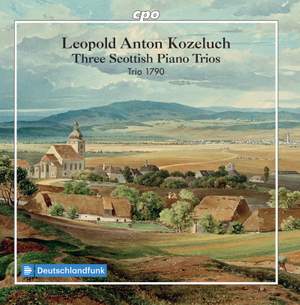 Leopold Kozeluch enjoyed such an outstanding reputation already in 1781 that he received an offer from the Archbishop of Salzburg to succeed Mozart as court organist. Kozeluch's piano trios must have been very popular since more than sixty of them appeared in print from 1781 to 1810. The three trios presented here were published in 1798/99 and had been preceded by forty other such works by him. The special feature of these three piano trios lies in his use of melodies from Scottish folk songs in their middle and last movements. Toward the end of the eighteenth century the Edinburgh publisher George Thomson had the idea to have Viennese classical composers set Scottish, Irish, and Welsh folk songs to music with an accompaniment for piano, violin, and violoncello and contacted Haydn, Kozeluch, Pleyel, and (later) Beethoven in the hope of winning them for this project. They gratefully accepted the offer and produced settings in rich supply – in Beethoven's case alone, more than two hundred – that unfortunately are almost completely forgotten today. One remarkable fact is that many of the transmitted melodies ended up being set to different texts. Another, by the way, is Kozeluch's meritorious service on behalf of the fortepiano; he supported its use instead of that of the harpsichord.