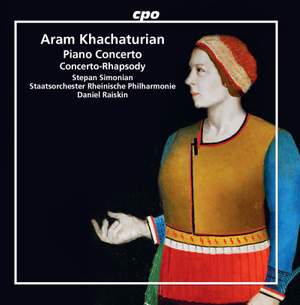 Simonian plays the solo part with assured technique, but the cadenzas in particular occasionally take on a hesitant, start-stop character…The recording keeps a good balance between the soloist... — BBC Music Magazine, October 2018, 3 out of 5 stars More…

Khachaturian: Concerto-Rhapsody in D flat major for piano and orchestra

Aram Khachaturian conquered the world with the boundless delight he took in composing. His Sabre Dance found its place in advertising, his Adagio from the ballet Spartacus accompanied a cult series, and prominent ice skating pairs danced their way into the hearts of their spectators to the Waltz from his stage music to Lermontov's Masquerade. On the other side, his symphonic music and concertante works even today continue to attract the greatest conductors and soloists. A unique, often imitated, but never reproduced synthesis consisting of fascinating instrumental virtuosity, exotic melodies, highly imaginative harmonies, and irresistible rhythmic spirit distinguishes the three concertos and three concert rhapsodies written by Aram Khachaturian during 1936-46 and 1961-67, and this double trilogy begins its cpo journey with the earliest and latest of these works. The Armenian pianist Stepan Simonian, who resides in Hamburg, the Russian conductor Daniel Raiskin, and the Rhine State Philharmonic, which Aram Khachaturian himself accompanied a good forty-five years ago during his visit to Germany, get things going on this quasi-authentic recording of these two concertante works for piano and orchestra timelessly reflecting each other like a mirror in a mirror.

Simonian plays the solo part with assured technique, but the cadenzas in particular occasionally take on a hesitant, start-stop character…The recording keeps a good balance between the soloist and the supportive orchestra, but fails to bring out the most striking innovation in Khachaturian’s scoring.

The central Andante is mysterious and fragile. Raisin’s accompaniment is spot-on, Simmonian’s performance superb. The spikily playful Concerto- Rhapsody is a rough diamond… it needs a first-class modern recording; which is exactly what it gets here.

It is wonderful to have this coupling in a modern recording…a first class recent recording. Fabulous.