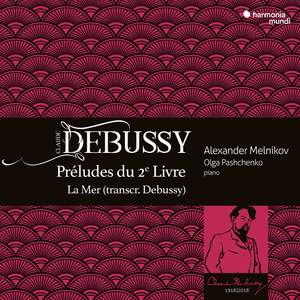 Prepare to be spellbound…This does not sound like an old piano, merely a distinctive one in the hands of a truly remarkable player…It is not only the individual sounds that impress…but also Melnikov’s... — BBC Music Magazine, August 2018, 5 out of 5 stars More…

A century after his death - 25 March 1918 - many harmonia mundi artists are eager to pay tribute to Claude Debussy, the magician of melody and timbre, the great ‘colourist’ and father of modern music.

Alexander Melnikov is among those pianists increasingly committed to playing the works of the past on the instruments on which they came into being (or could have done so) and so it is on a ‘period’ piano (an Érard piano) that he breathes new life into Book II of the Préludes but also, with the help of Olga Pashchenko, the extraordinary transcription of La Mer by the composer himself.

Prepare to be spellbound…This does not sound like an old piano, merely a distinctive one in the hands of a truly remarkable player…It is not only the individual sounds that impress…but also Melnikov’s ability to combine seemingly contradictory textures, with sharply drawn detail surrounded by a shimmering haze as if multiple pianos are being used. This is indeed compelling pianism

The range of colour and attack he conjures from [the Érard] is nothing short of breathtaking… Time and again markings such as ‘spiritual and discreet’, ‘soft and dreamy’ and ‘voluble’ register with uncanny precision, losing any suspicion of whimsy… and I can truly say that the duet version [of La mer] has never so completely made me forget about the orchestra…We’ll be lucky if the Debussy centenary throws up any release as distinguished as this one.

The nigh-on orchestral range of colours and textures which he conjures from his Érard piano is little short of miraculous (it’s as if the keyboard morphs from celeste to Steinway and back again within a few bars in some movements), and he points up the modernism of the music to such an extent that (for instance) Ondine sounds like The Rite of Spring.

While this matching of music to instrument has been tried before, it’s particularly successful here thanks to the maturity and insight of Melnikov’s playing. What the Érard gives you is a crisp, transparent register for each part of the keyboard: blend is not the aim, but rather a distinctive set of flavours so that Debussy’s inspirations, by turns whimsical, witty, imaginative and passionate, each have their own colour.

It’s special because the playing is so good. Plus his instrument is exceptional...Veiled tones, nimble action; for Debussy this is the perfect French mix as the notes alternately drift and cascade, pursuing not so much clear-cut themes or accepted forms as ever-shifting miracles of textures, moods and emotions. Brilliance can shine through the Érard mist, but the sound is always warm and humane, never mechanical.