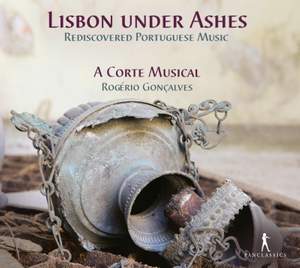 Goncalves and his excellent players and singers have imaginatively realised a varied, characterful and in one case teasingly familiar selection. — Sunday Times, 12th August 2018 More…

1755 was a sombre milestone in Portugal’s history. An earthquake, followed by a tsunami, destroyed the city of Lisbon, taking thousands of lives with them. Among the many victims of these events is Portugal’s musical heritage. The entire music collections kept mainly in one of the wings of the Royal Palace was lost.

Luckily, Portuguese music manuscripts from before 1755 are still preserved in other archives. This is the material used for this CD. The program is representative of the different facets of the relatively scarce evidence of Portuguese music that survived the catastrophic loss of 1755: music in Portuguese, music by a Portuguese composer, music from the Portuguese colony, Spanish music in Portugal, and Portuguese popular music. The program of this recording revives these precious pearls of great importance, offering the public a rare opportunity to enjoy 16th- century ‘Portuguese songs’ in a performance full of wit and vivacity.

Goncalves and his excellent players and singers have imaginatively realised a varied, characterful and in one case teasingly familiar selection.

This is one of the best musical knees-ups I’ve heard for ages, a collection of earthy, foot-tapping madrigals and other pieces from the 16th and 17th centuries, gathered from the few surviving Portuguese remnants.